The symbols of Sliven are impressive and legendary – The Blue Stones, the old elm-tree, the monument of Hadji Dimitar, the monument of the 7th cavalry regiment – “The eaglet”, the town clock, Dobri Zheliaskov`s factory, Chintulov's songs… symbols uniting the spirit of enterprise, the rebellious flame, the impulse of the enlightenment. Even for those visitors of the town who are not acquainted with Bulgarian history, these symbols make sense because they are not forgotten pieces of history but represent a part of the contemporary atmosphere of the town. In Sliven history and tradition meet modern dynamics and diversity – a combination, hiding the unique charm of the town below in the foot of the Blue Stones. 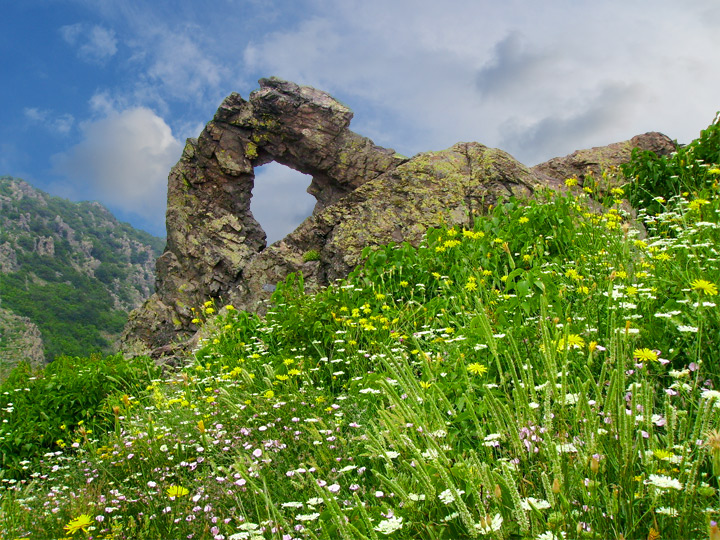 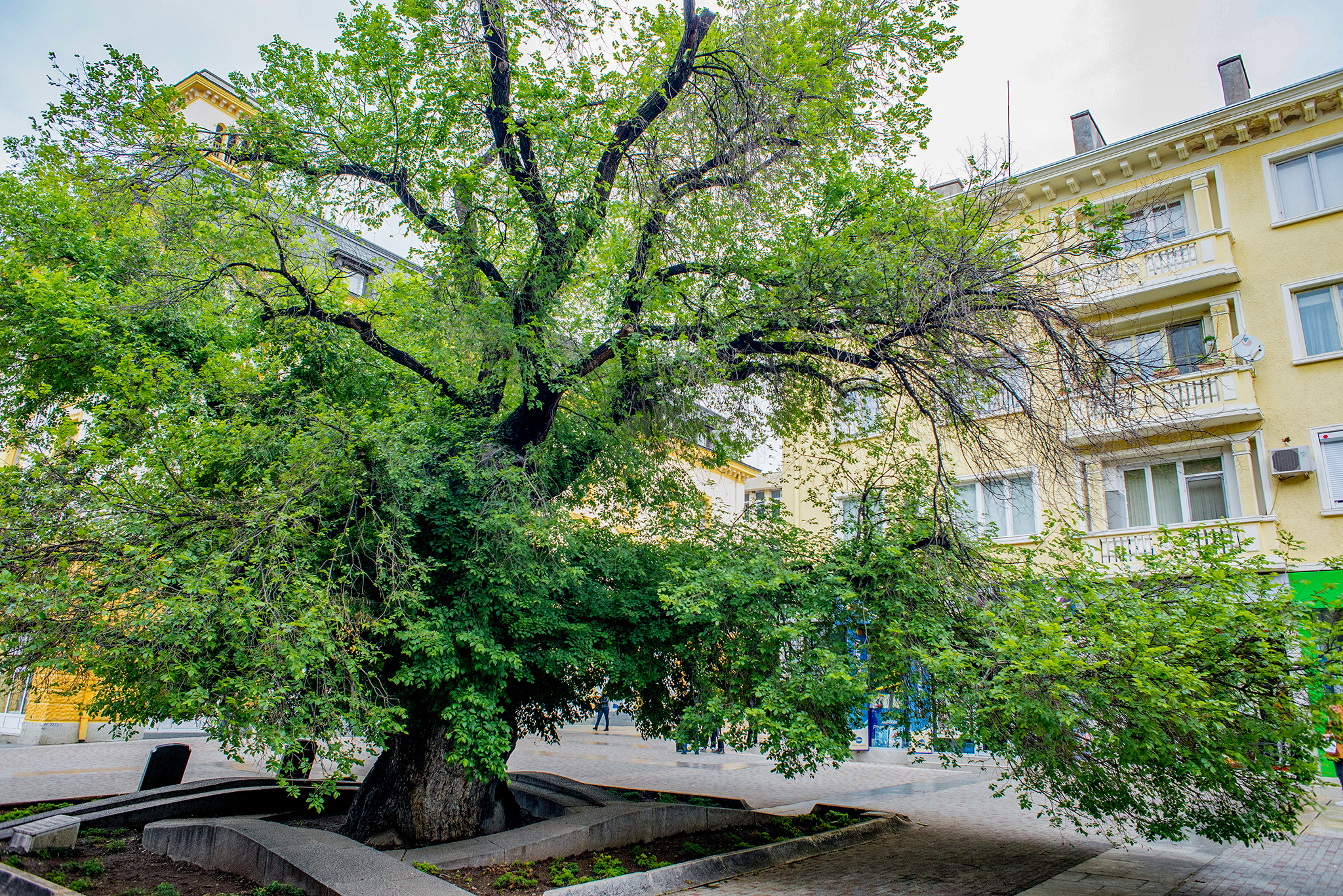 The millennial tree was located in the city center at the beginning of the main promenade and is huge, majestic and beautiful.

The old elm tree was connected with the history of Sliven since the Turkish yoke, This is a famous tree and it is without any concerns one of the greatest symbols of Sliven. It is a sacred tree considered as a monument and a symbol of the fight and the high spirit of the citizens during the yoke. This is an important, touching and proud specimen of a disappearing species.

"It is not proved but some people believe that many young men and rebellions were hung there during the liberty fights"...

Several years ago the tree was struck by tracheomycosis. Municipal authorities, experts from the country and abroad, were looking for the best opportunity to keep the tree alive, but the chance for survival of elm is still minimal. A witness of events from the glorious past, a long-standing symbol of the city, a source of inspiration for generations of poets and artists, Old Elm will remain forever in the heart of citizens of Sliven.

THE MONUMENT OF HADJI DIMITAR 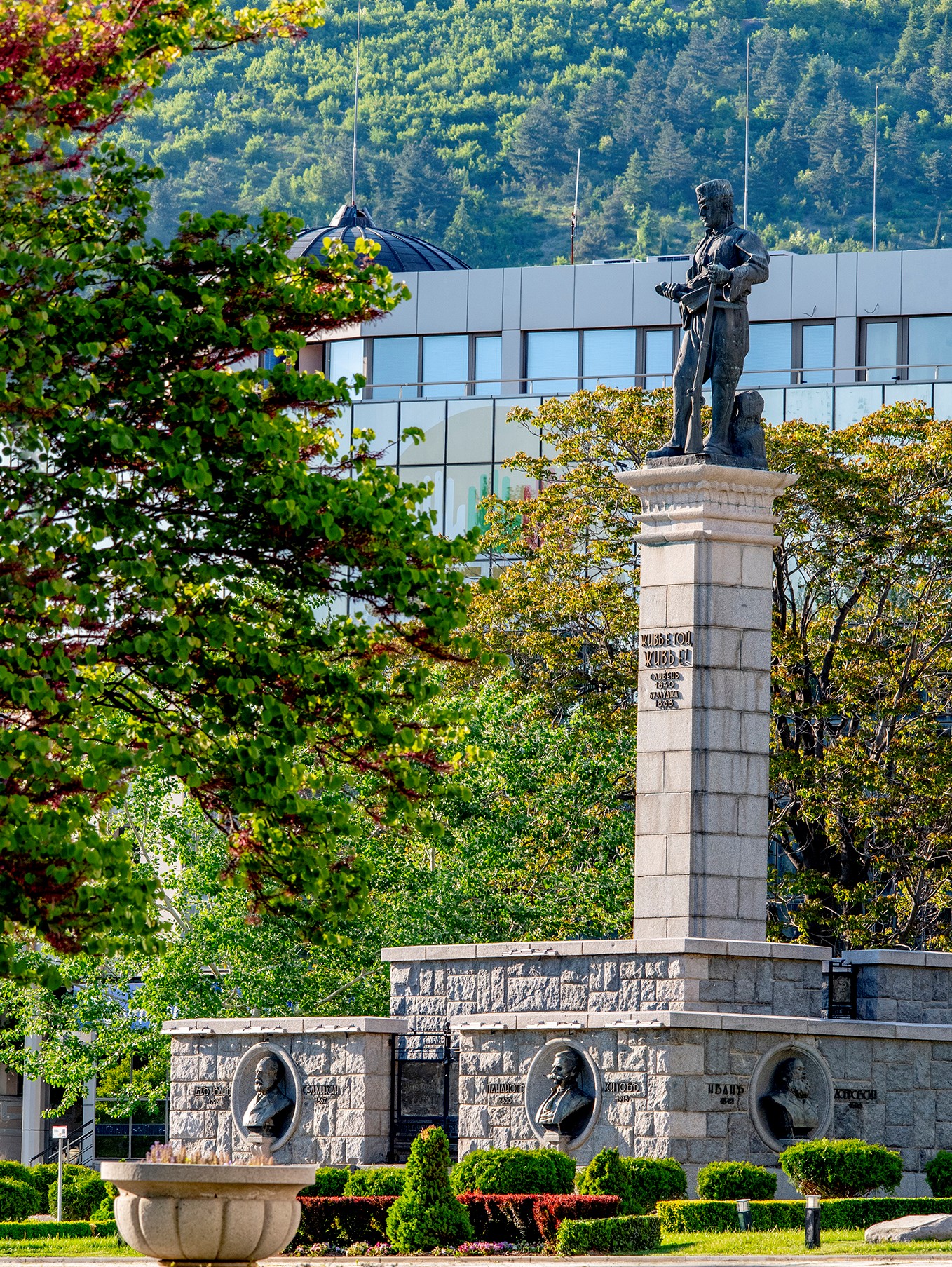 One cannot imagine Sliven without the presence of the legendary voivoda Hadji Dimitar on the central square. One of the unique symbols of our town, the monument is a testimony to the glorious heroism and the gratitude of people. Its architect is Jordan Jordanov whereas the sculptor Stefan Peichev creates the figure of Hadji Dimitar as well as five of the busts of prominent residents of Sliven from the Bulgarian national revival. The other three busts are made by Vassil Vitchev, Dimitar Gadjalov, Ianko Pavlov. Peter Damianov and Stefan Damianov are the authors of the other relieves of the monument.

The monument of Hadji Dimitar is officially inaugurated on 8th November 1935 “thanks to the generous donations of several residents and companies of Sliven, Sliven co-operations, the Popular bank as well as the church “St. Dimitar”, the Municipality, the State and the Sliven cultural unions of Sofia and Bourgas, thanks to the students from all over the country…” In 1993-94 the monument was completely restored on expense of Sliven Municipality. Once again on the inauguration of the monument in 1935 emphasis is put on the patriotic merits and the sacrificial contributions of Hadji Dimitar and Sliven to the awakening of the national consciousness and the will for freedom.

THE MONUMENT OF 7TH CAVALRY REGIMENT – “THE EAGLET” 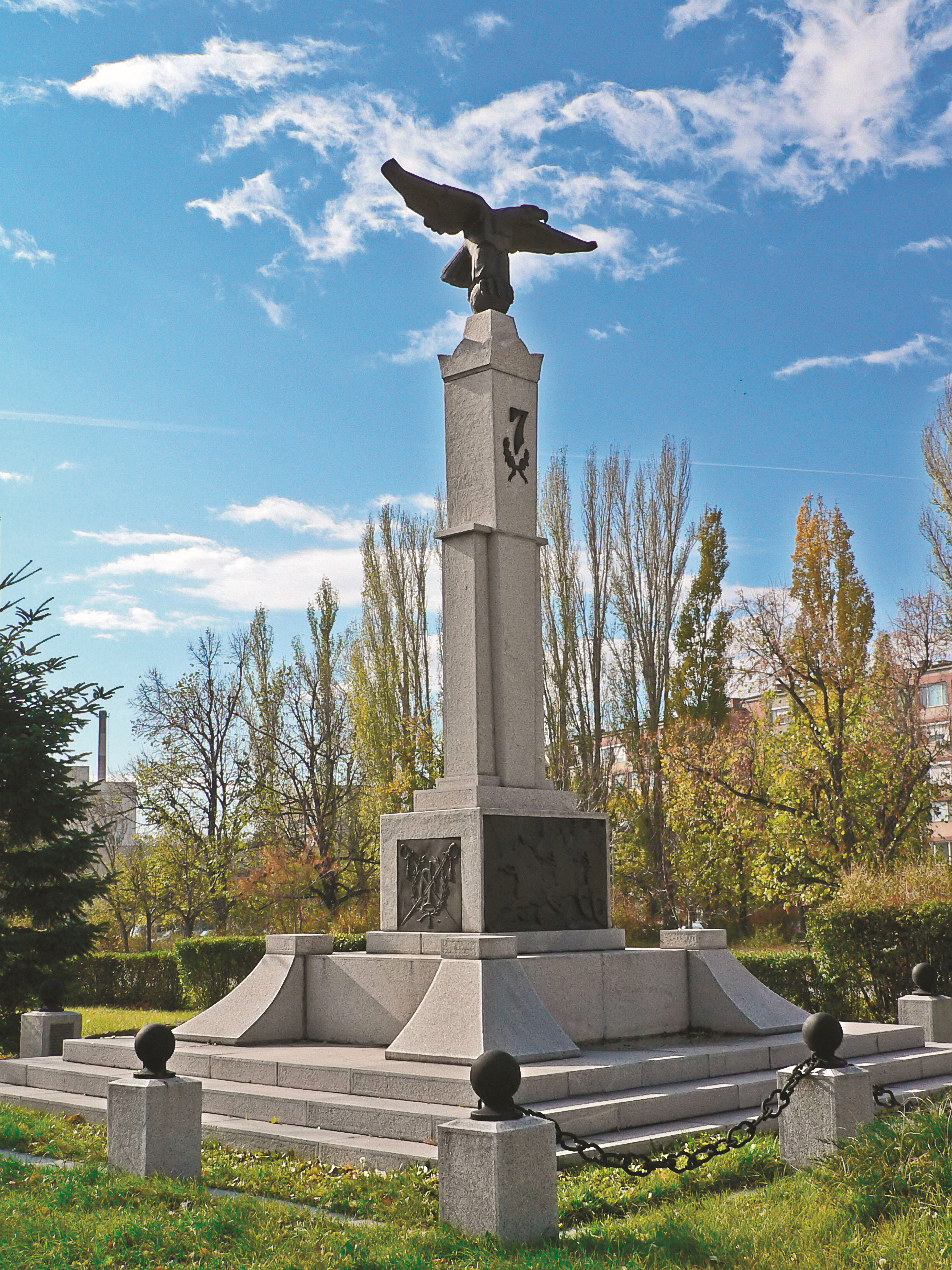 Originally erected as a donation from the residents of Sliven, in 1996 the monument was renovated thanks to significant donations from the National donations fund – “13 centuries Bulgaria” and the Municipal council of Sliven, the command of Third army and from club “Otvoreno obshtestvo” – Sliven. 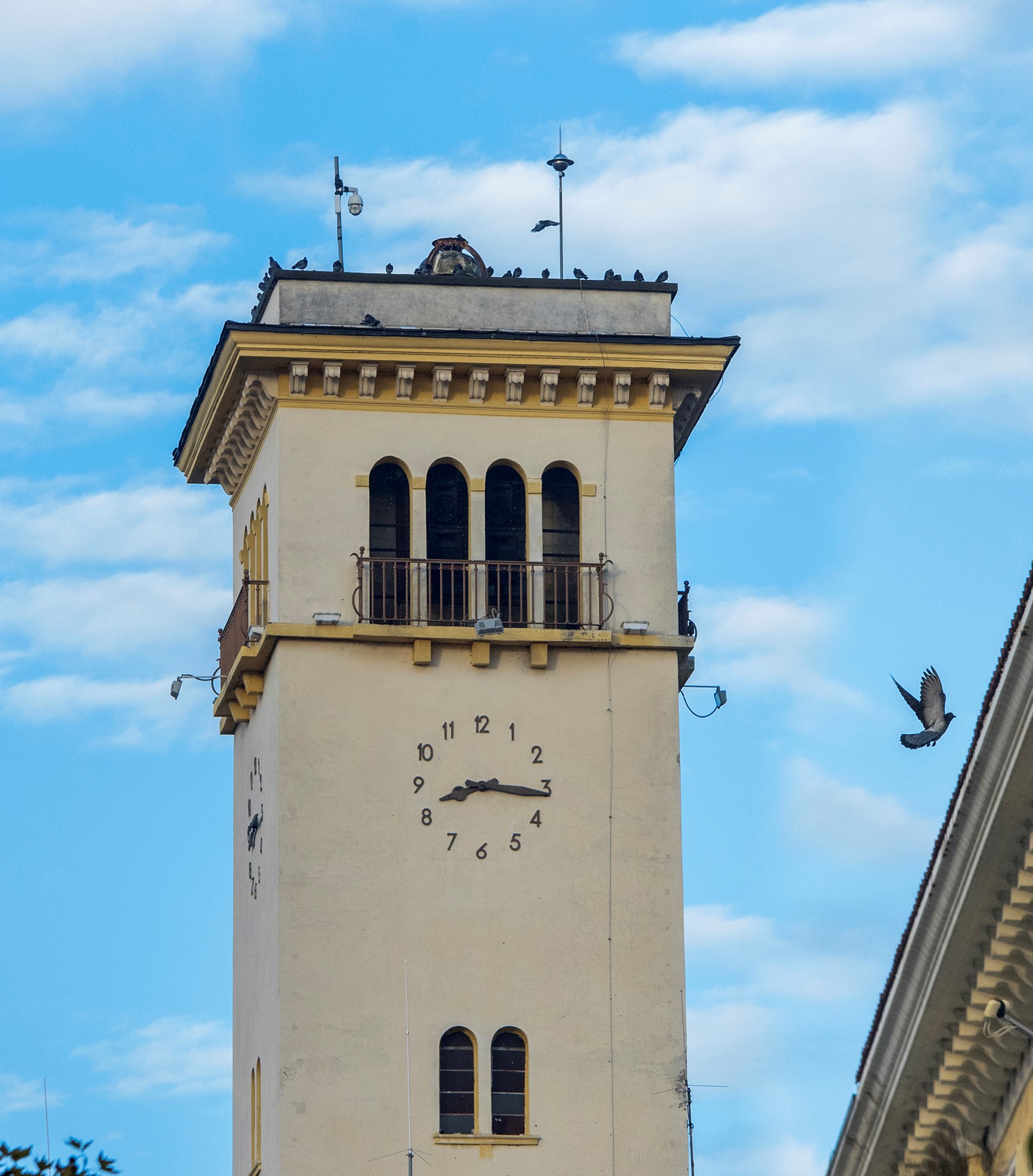 More than sixty years the town clock measures the personal and the social time of the residents of Sliven.

THE FACTORY OF DOBRI JELIASKOV 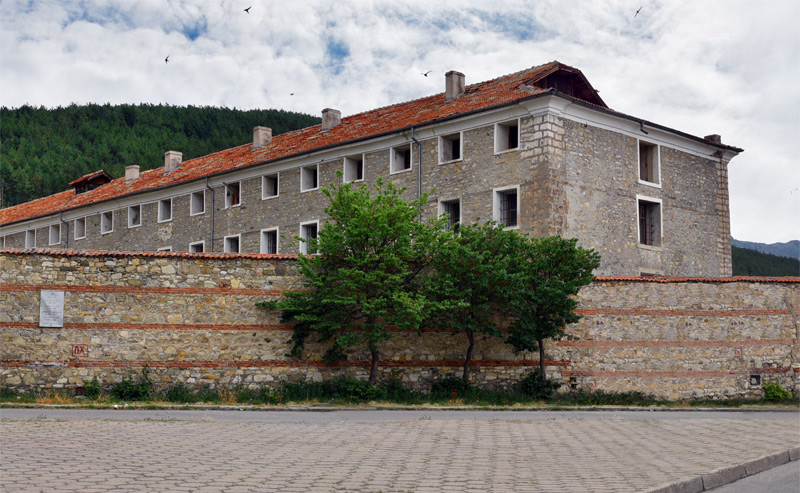 Even in the 18th and the early 19th century the wool textile production of Sliven was widely spread in the limits of the Ottoman Empire. The abundance of mountainous water, the highly developed sheep-breeding in the region and the new monetary relations in Turkey influenced the development of one of the typical Slive's crafts– homespun tailoring. Having left Sliven during the mass migration of its residents to Russia after the Russian-Turkish war (1828-1829), Dobri Jeliaskov settled down in Ekaterinoslav where he got acquainted with the development of the textile industry in Russia. There he took down models of looms, spinning wheels and carding machines, some of which he bought, and in 1834, after his returned to Sliven, he established a specialized workshop for production of wool cloth with the division of labour typical for the manufacture.

The quality and the appearance of the cloth produced by Dobri Jeliaskov provoked the interest of the Turkish administration which regarded the cloth as a means of reducing the import. Dobri Jeliaskov was therefore summoned by the sultan to show patterns of the cloth he manufactured. They were approved and, as a result, with the famous sultan’s royal decree in 1836, Dobri Jeliaskov was given a free hand by the government to produce cloth of the presented samples. The royal decree indicates: “Men like him who are in my empire, deserve my imperial goodwill.”

Sliven is the native town of the patriot Dobri Chintulov (1822-1886), a national teacher and a poet, an author of revolutionary songs which inspire the people in their struggle against the invader, songs that deeply move people up to the present day as an expression of national pride and love of freedom.

A TOWN OF SPIRITUALITY

The cultural heritage of the town continues in the life of contemporary Sliven. There are three state cultural institutes in Sliven - a Dramatic Theatre, a Puppet Theatre and a National Museum of textile industry, as well as a range of Municipal cultural institutes. The Historical museum contains more than 80 000 exhibits. The Art Gallery possesses one of the richest collections in the country of more than 6000 pieces of art and three permanent expositions. The Regional library has a unique fund of more than 265 000 library units from diverse fields of knowledge. The exemplary national community centre “Zora” is the oldest cultural institute in the Municipality where is situated the oldest and biggest community centre library containing more than 125 000 volumes of literature, a valuable collection of early printed books and periodicals from the Liberation; children’s art school; choir “Dobri Chintulov”, winner of many national and international competitions. The symphony orchestra and the folk song and dance companies of the town take a major part in its cultural life. The club of the cultural workers is an attractive centre of professional art associations. Other 51 community centres function on the territory of the municipality, 11 of which are in Sliven, as well as many non-professional art collectives.

In Sliven region are preserved 460 archeological, over 200 architectural and about 120 historical monuments of culture, nine of them being of national importance. Among the most visited are the National Museum of textile industry, the Museum of Sliven manner of life, Hadji Dimitar`s house, the Art Gallery, the churches “St. Sofia” and “St. Dimitar”.

The International children`s folk dance festival, the National children`s book festival, the folk fairs - ”Masquerade games festival”, “On fair by the Tundja river”, “Kermen”, “Winter festivities – Mechkarevo”, National fair of the Karakachans etc. are carried out in Sliven. /Cultural agenda/. In 2003 Sliven hosts for the first time the International festival of the mountain film.